A forgotten fast Ford, the Mk6 Fiesta ST150 is great to drive, easy to tune and cheap to run. Here’s how to buy the perfect package for everyday practicality and weekend track action.

Overall condition – A Fiesta’s overall condition will tell you more about how it’s been looked after than any sales ad. Step back, inspect the paintwork, check the interior and take your time before making a decision.
Engine – ST150s tend to consume oil, so beware of knocking from an oil-starved bottom end or blue smoke from the exhaust. Juddering and a poor idle are pretty normal.
Transmission – Beware of clutch slip, which can be pricey to put right. Run away from any ST150 with rumbling or whining from the transmission.
Body – Mk6 Fiestas don’t tend to rot badly, but there’s potential to find corrosion in the wheelarches, doors, footwells, sills and inner arches. Check panel gaps and paintwork for accident damage.
Suspension – Any ST150 should give you a buzz. A test drive is vital. If it’s sloppy, clonking or unresponsive, find another car. There are plenty of Fiestas out there.

Facelifted ST150s, introduced in October 2005, are worth a bit more cash: they’re identified by their bulbous headlamps and updated rear light clusters (with twin reversing lamps); inside there’s a soft-touch dashboard in dark grey, blue or red, plus shiny door handles and gearstick surround.

As always, invest in a thorough identity check (not a cheap phone app), and it’s vital to ensure the car’s chassis number matches between the log book, the VIN plate on the offside B-pillar, a stamping in the offside suspension turret, a tag on the nearside of the dashboard (visible when looking through the windscreen from outside) and what’s stamped into the floorpan next to the driver’s seat. Don’t forget to take an OBDII code reader and plug it into the car’s port to check the VIN on the ECU. 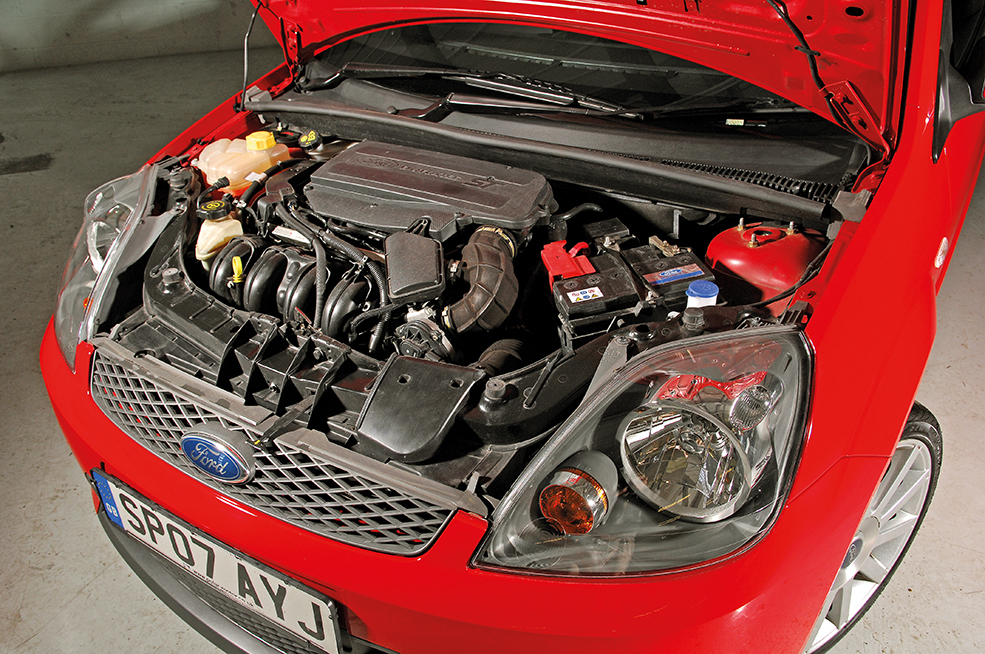 Nothing to get excited about, the ST150’s 2.0-litre Duratec was lifted from the Focus and Mondeo, meaning it’s unstressed, ultra-reliable and capable of covering mega mileage. Its greatest weakness is a tendency to consume oil; glugging a litre every 1000 miles isn’t uncommon, with potential problems resulting from running low.

Inspect the exhaust for blue smoke at start-up or under load, suggesting valve stem seals and blown piston rings respectively.

Examine the service history, and check the dipstick to ensure the oil is fresh and topped-up. Listen for knocking from the bottom end due to an oil-starved, worn crankshaft and/or bearings – a pricey rebuild is the only solution.

Lighter tapping from the top of the engine is usually the inherently-noisy fuel injectors, but beware of a slack, rattling timing chain – especially from a worn/high-mileage example.

Most Mk6 ST issues are much less to worry about. Poor economy is normal (especially when driven hard), and many owners report jerkiness, particularly from cold or during parking manoeuvres; keeping up the revs should help, but cleaning the throttle body may effect a cure.

Difficulty starting (needing several cranks to fire up), followed by very poor idling (with the revs jumping around) was especially common on pre-facelifts, and part-cured by a Ford ECU reflash. Updated software was also reckoned to solve an annoying rev hang between gearchanges.

The Duratec responds well to modifications, so don’t be afraid to take on a modified ST, especially if it comes with receipts from trustworthy tuners. 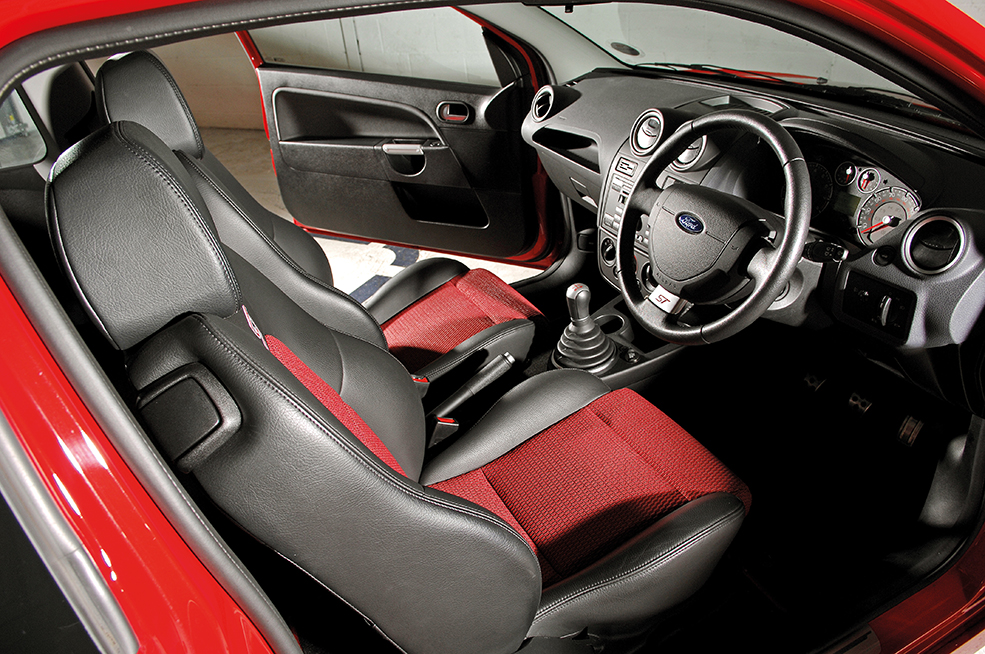 Generally reliable, even when abused or neglected, the ST150’s gearbox is a regular IB5 five-speed, found in millions of Fords from 1995 onwards. Many will see well over 100,000 miles without a fault, yet a few reputedly blew up; this was far from common, and occurred on early low-mileage examples. Since then, it’s applied mainly to heavily-modified cars – in which case, listen for whining, rumbling and growling. The standard differential can’t cope with big power, and when it goes bang it can trash the entire gearbox.

The ST150 should feature a pleasant, precise shift. Notchiness is a concern, especially if accompanied by excessive noise. Synchromesh failure (and need for a new gearbox) causes crunching between gears (especially when changing from second to third). Otherwise, feeling tight from cold but sloppy or difficult to engage gears once warm is the sign of a stiff or knackered linkage (which may recover by simply lubricating with multi-purpose grease).

Juddering when pulling away is usually a quirk of the car (or ECU software), although you need to ensure the clutch isn’t on its last legs – either slipping or biting too high on the pedal. Test for clutch slip by accelerating from low revs in third gear, ensuring the road speed increases conducive to engine revs.

Fear not if it’s just a floppy pedal. It’s extremely common to find a Mk6 where the master cylinder linkage has become detached.

An official Ford fix to reattach the pedal involved adding 50p-worth of modified clip to stop the cable from falling off. Not all cars received the upgrade via the recall, but facelift models had a longer pedal anyway. It’s not a deal-breaker. 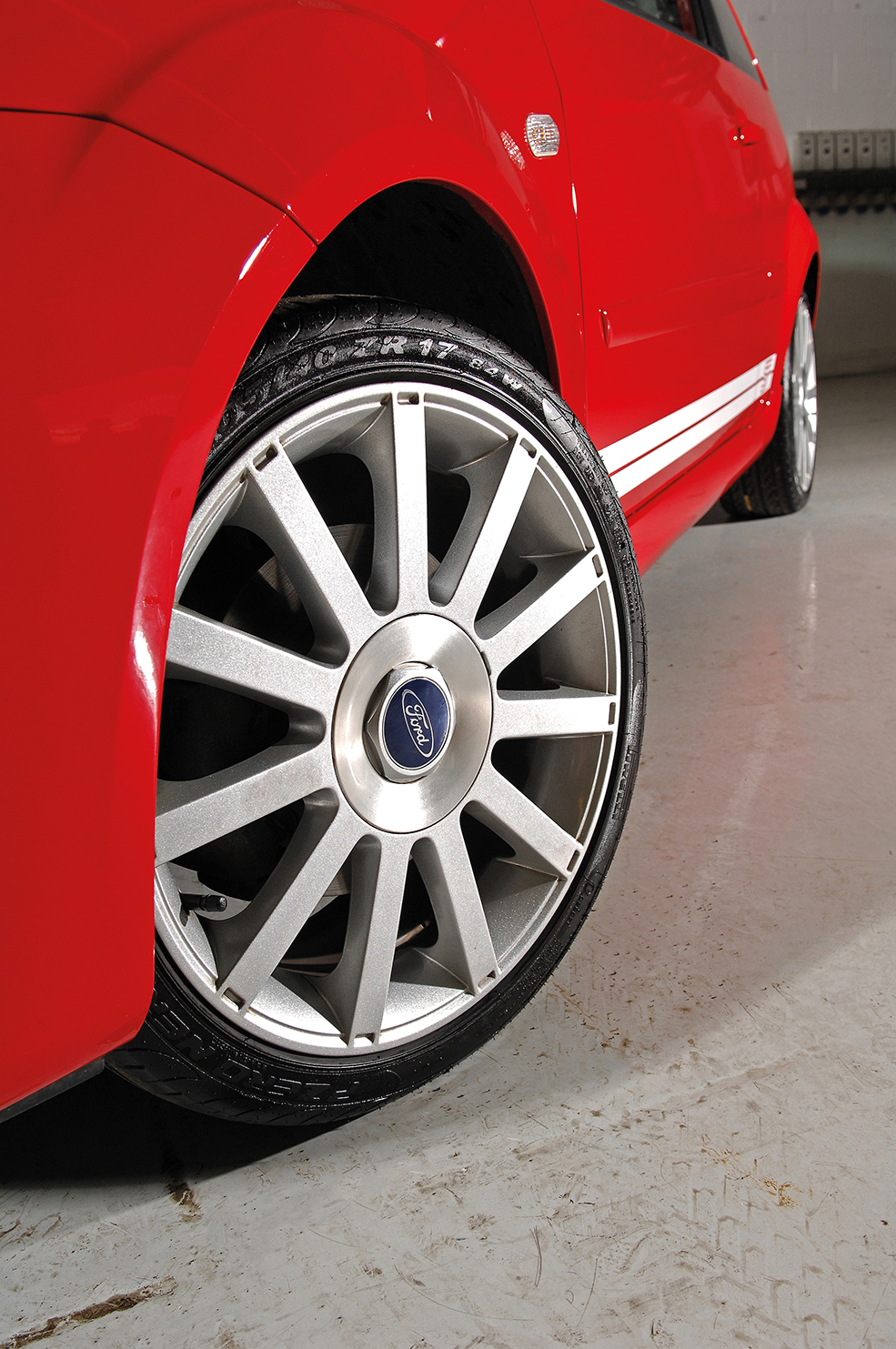 Handling is key to the ST150’s appeal. If it’s not sharp and agile, you’re buying the wrong car.

A test over mixed roads is essential. Worn-out rubber bushes are the most likely culprit of a deadened driving experience, while knackered dampers and poor alignment will also adversely affect roadholding. Snapped coil springs are fairly common on the Mk6; they may clonk or rattle over bumpy surfaces, but aren’t often obvious until you look underneath.

Listen for rumbling – jack up the car and give the rims a wobble to check for worn wheel bearings. Weird groaning noises coming from the front (especially when hot) point to the power-assisted steering (PAS) pump being on its last legs; the steering may well feel heavy too. Check the colour of the PAS fluid, which should be red; black liquid in the reservoir tells you it has overheated at some point in the past, which is common for hard-driven STs thanks to the tank being attached to the engine. Refreshing the fluid should help, but an ST150 being used on tracks ought to have a PAS tank relocation kit and/or an oil cooler fitted, both of which are suitably cheap to buy.

ST150 brakes work well – with ST170 callipers up front and rear discs. It’s a lightweight car, so fast-road or track-day pads should be more than man enough for any task. But a hard-driven example will probably exhibit juddering through the brake pedal or steering wheel, thanks to worn or contaminated discs and/or pads.

Rear brakes can be prone to seizing, and it’s typical to find the handbrake struggling to hold the car. Usually it’s due to a stretched or dry handbrake cable in need of lubrication – the latter in particular if you hear squealing from the offside rear.

Ford Fiesta ST Mk6 brake pipes are renowned for rusting, and can be fiddly to replace. 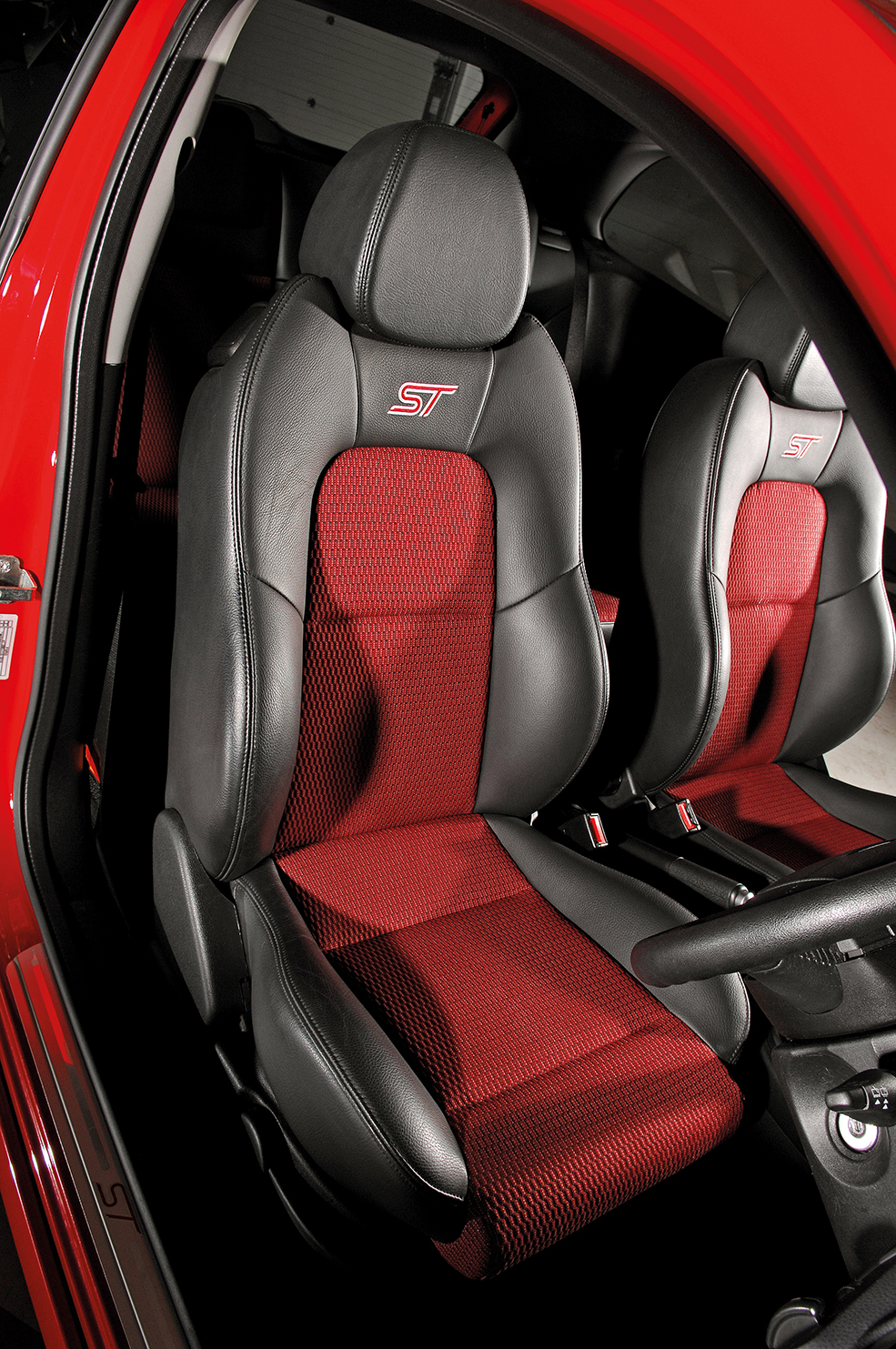 Don’t expect too much. The Mk6 Fiesta was an economy model, and the cabin reflects it. Rattles, squeaks and groans are simply part of the ST150 soundtrack; most owners fit a louder exhaust and turn up the stereo, which seems to help.

The dashboard is most likely to be noisy, with broken clips and cheap brackets no longer lining up. Cold weather tends to make it worse. High-mileage examples often look shabby, but even lesser-used STs may contain scuffed plastics and look worn around the edges.

The upholstery isn’t too bad, other than sagging, but the folding seat catches fail regularly, with loose cables or snapped connections underneath.

Trim isn’t tricky to find at the moment, but give it a few years, and certain colours will become rare. Buy spares and stick them in the loft.

Full-leather heated seats were optional (standard on the pricey ST500), while some Mountune STs were treated to black leather/suede Recaros. Well worth searching for.

Check all the gadgets work property. A heated windscreen was standard, and elements are prone to failing; heated mirrors suffer the same fate (operated by the rear window heater switch). Fully-functioning air conditioning is a bonus.

Factory alarm systems can be erratic (needing a replacement module), glowing airbag lights are common (a loose connection under a front seat is the usual culprit), and alternators are sometimes problematic; check the battery light isn’t on.

A trip computer was standard on the facelifted ST. Extra-cost options included Technology Pack, comprising automatic headlights (which may flick around, wearing out the motors), auto windscreen wipers, (prone to failure) and power-folding mirrors (which break; when you lock the doors, make sure they don’t keep clicking). 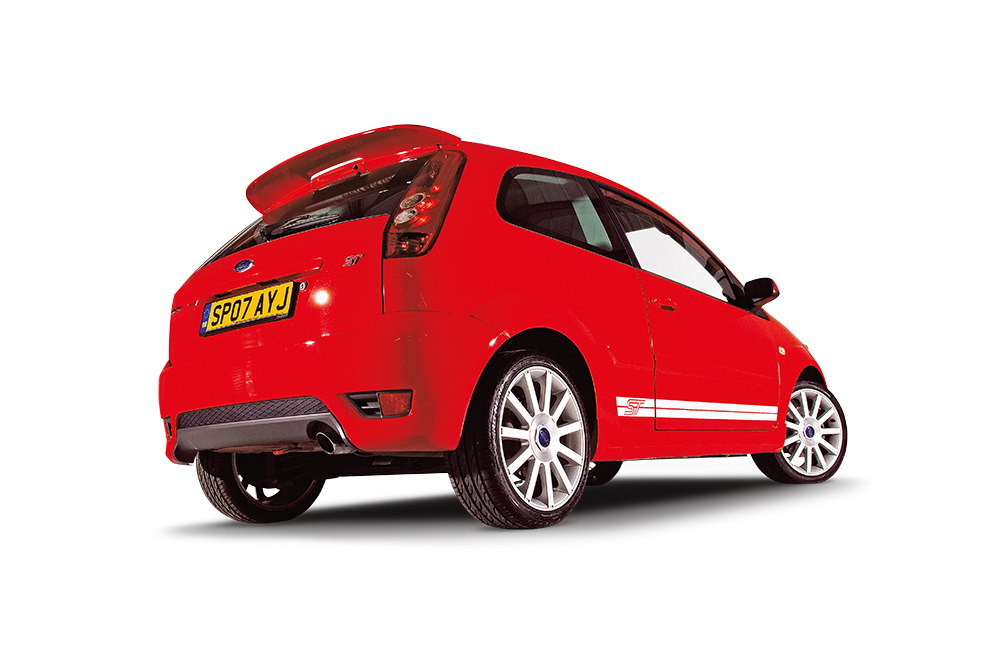 Rust isn’t a serious concern on the Mk6, but corrosion could be creeping its way around the car, and your go-faster project might become a rust-chasing exercise. Look for bubbles around the wheelarches, notably the rears where they attach to the side skirts. The sills may well be rotting, but it’s unlikely you’ll see unless you take off the skirts.

If possible, remove the wheelarch liners and shine a torch into the inner wings; muck and moisture gets trapped behind the foam insulation. Left alone, they’ll form substantial holes – if they haven’t already…

Doors tend to fill with water when the drain holes become blocked, leading to rust forming from inside out. Check the tailgate too, and ensure there’s no water leaking into the boot.

Inside the cabin, inspect the front footwells, especially the passenger side; a poorly-sealing pollen filter lets rainwater leak into the car, eventually resulting in a rotten floor.

Body colour choices are down to personal preference, although Performance Blue and Frozen White are most desirable; they sometimes fetch a small premium.

Many ST150s were specified with Exterior Styling Pack of side stripes and over-the-top bonnet/roof/tailgate stickers. Rare sunroof-equipped STs received only the door decals.